Home » VPN » Is Your VPN Leaking Your Data? Find Out Right Now
VPN

Is Your VPN Leaking Your Data? Find Out Right Now

Can a VPN protect your data 100% of the time? Normally, yes, but there are exceptions – like when the service suffers leaks.

Not familiar with VPN leaks? No problem. This article will tell you everything you need to know; what they are, what causes them, how to detect them (try the VPN tool now if you’re in a hurry), and how to prevent them.

What Are VPN Leaks & Which Ones Put Your Privacy at Risk?

A VPN leak is when your IP address or traffic leaks out of the VPN encrypted tunnel. Basically, it means the VPN isn’t hiding your IP address or your online browsing. Also, websites are able to block your access with geo-restrictions, and ISPs and advertisers can track your digital footprints.

Right now, there are three VPN leaks you should worry about:

Like the name implies, this is when your IP address is exposed, even if you use a VPN. There come in two different types: IPv4 and IPv6 leaks.

IPv4 is the standard IP format we’re all used to. If this kind of address leaks out of the VPN tunnel, it means there is a miscommunication error between your device and the VPN provider’s server. This often happens due to poor server configuration.

IPv6 is the successor to IPv4. It has a much more complex format, and we’re at the point where we have to use them because IPv4 addresses ran out.

Unfortunately, not a lot of websites and services support IPv6 yet – including VPN services. And that lack of support can cause an IPv6 leak. Simply put, the VPN will transport your IPv4 traffic through the encrypted tunnel, but will leave out the IPv6 traffic.

However, WebRTC is pretty problematic for VPN traffic, apparently, since it can actually cause serious IP leaks. That tends to happen because WebRTC can take precedence over the VPN tunnel.

A DNS leak is when your DNS queries leak out of the VPN tunnel. Instead of going through the VPN provider’s DNS server as usual, they will go through the ISP’s DNS server.

If you’re not sure what DNS queries are, just think of them as the connection requests you send to websites. Anyone who sees them will know what you want to browse online. In this case, that would be your ISP or the ISP of the WiFi network you’re using.

There are a lot of things that can cause DNS leaks:

How Do You Know If Your VPN Is Leaking Data?

It’s not that hard, actually. ProPrivacy has a very user-friendly leak test you can run. Try the VPN tool now to see if there are any problems. The whole process takes just a few seconds, and you’ll quickly find out if you’re dealing with any: 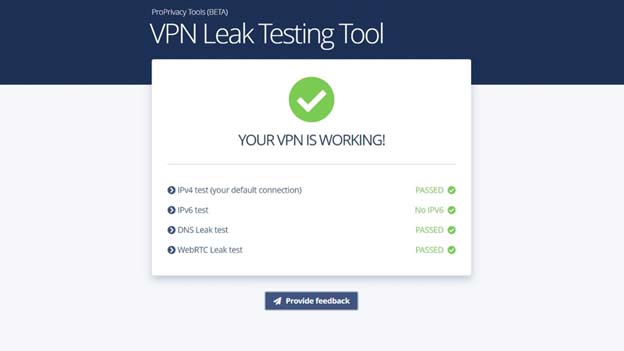 How to Protect Yourself from VPN Leaks

ProPrivacy has a link to a very helpful guide on how to deal with this on the leak test tool web page. But if you’re in a hurry right now, here’s a quick list of things you can do:

Besides all that, you should also consider using a VPN that has a Kill Switch. That will protect you from traffic leaks – basically, your whole traffic becoming exposed if your VPN connection suddenly goes down. Unfortunately, that can happen even if you’re using a decent service, so it’s better to be safe than sorry.

If you’re not familiar with the concept of a Kill Switch, it’s a feature that shuts down your web access when your VPN goes down. You’ll only regain it when the VPN connection is up and running again.

A VPN can only protect your data if it doesn’t suffer leaks. That’s why you should test it regularly to make sure everything is fine.

Know any other leaks VPN users should worry about? Let us know about them in the comments below or on social media.

The Qualities That an Audience Response System App Must Have

SketchBook Vs Clip Studio Paint 2021- Which is better Software

Hola VPN Vs ExpressVPN 2021- Which VPN Is Better For You?

Magix Vegas Vs Adobe Premiere | Which Is Better?

Difference Between .Com And .Net – Which Domain Extension Is One Step Ahead In SEO?